Pick your poison — and if you’re like countless cannabis fans across the globe, you’ll hone in on this potent sativa from the southern tip of Africa that has earned its place as one of the most famed cannabis strains on earth. A true landrace strain, Durban Poison is named for the South African port city where Dave Chapelle hid out after quitting his show back in 2005. This is said to be an energetic, cerebral, and potent strain that is perfect for getting your creative juices going or planning out your next project, and may have you wanting to hop a plane to Africa, and get lost on a beach, in the savanna, a dancehall in Durban, wherever your heart desires. 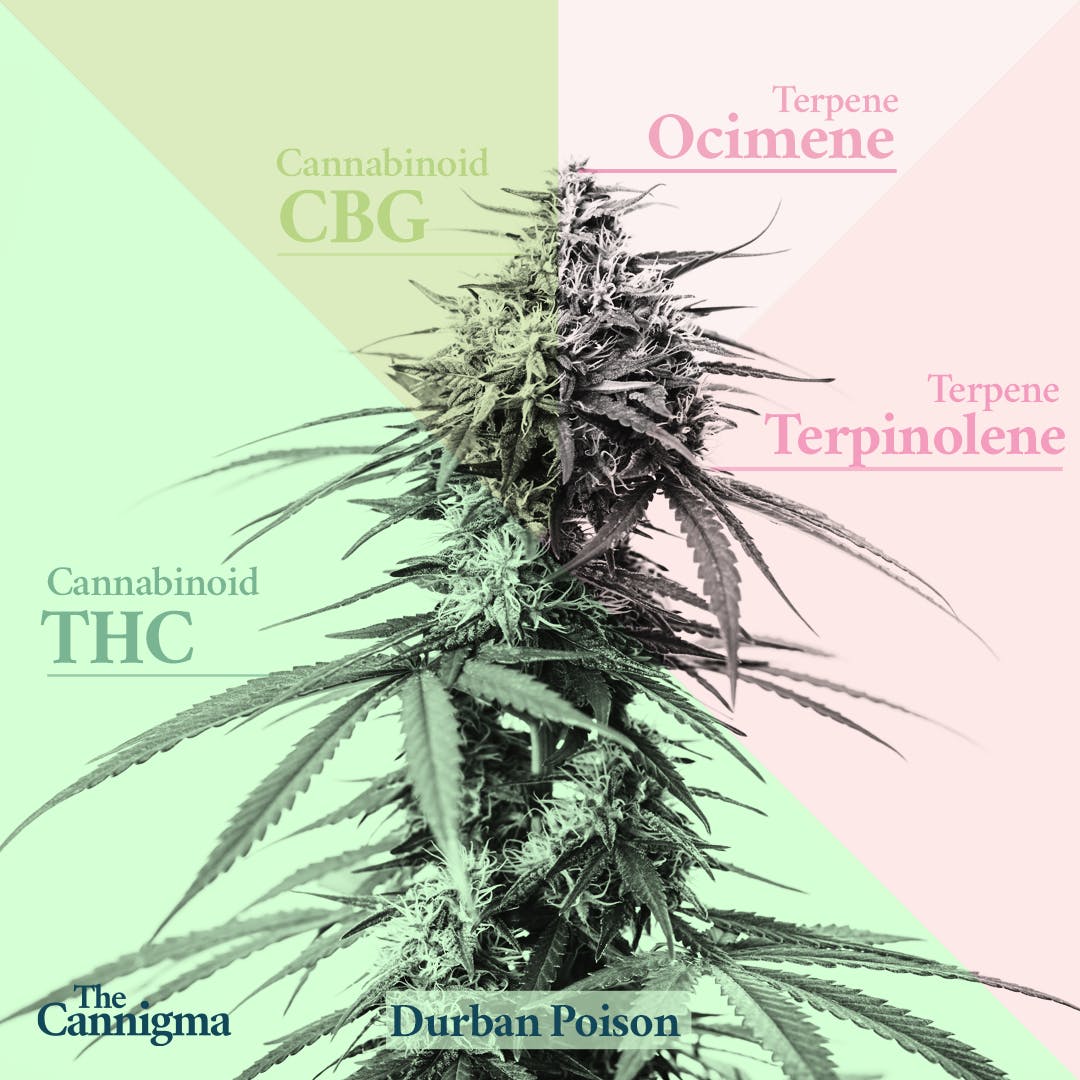 Durban Poison is a classic example of a “landrace strain.” For the uninitiated, these are cannabis strains that evolved naturally over the years, as cannabis migrated from Asia to Africa and the Americas. The chemistry of these plants changed as they evolved to the local conditions, developing the traits and attributes needed to survive. They were also altered over the centuries by the local inhabitants, who would select and then cultivate the plants that produced the effects they were looking for.

These landrace varieties formed the genetics of the thousands of medicinal marijuana chemovars developed over recent decades.

But how did Durban Poison make its way from the bush of South Africa to a million smoke sessions across North America? One oft-repeated story is that in the late 1970s, famed American cannabis breeder Ed Rosenthal brought some South African seeds back to the US, where he gave them to breeder Mel Frank, who also donated some seeds to Amsterdam breeder Sam the Skunkman.

In a forum post from 2007, the Skunkman said that “South African Durban Poison was first introduced by me,” after he received “maybe 100 seeds from South African and grew them in California in the late 70s.” He said that most were hermaphrodite with small calyxes and “not so great buds.” He added that he saw the potential and began breeding out the faults, and by the early 80s it was ready for launch in Amsterdam, where it was a major hit. As his name indicates, Skunkman was instrumental in the formation of the seminal Skunk strain, which, like Durban Poison, has had an outsized influence on the cannabis world as a whole over the past few decades.

Whatever the actual origins of today’s Durban Poison are, the strains from which it came grew naturally for untold years in the wilds of Africa.

Today, it is perhaps best known for its use in breeding some of the cannabis world’s most iconic and popular strains. The hybrid Cherry Pie strain, for one, is a mix of Granddaddy Purple and Durban Poison, which could account for properties commonly associated with both indica and sativa. Perhaps most famously, the superstar strain GSC (formerly “Girl Scout Cookies’ ‘) is said to be a cross of OG Kush and Durban Poison. The strain was instrumental in the popularity of “Cookies Fam” one of the biggest trend-setters in the world of weed today.

The Durban Poison strain is known for its dank, sweet, and spicy smell, and a sweet flavor that many say evokes licorice. The high is very energizing, and Durban Poison is often portrayed as a sort of “espresso of cannabis.” It’s a great daytime strain when you want to get your creative juices flowing or explore the great outdoors.

Cannabinoids and terpenes in Durban Poison

The chemical profile you see below is an average of laboratory tests for products called “Durban Poison” — so it’s just an estimate of what you might find when you buy Durban Poison.